Being on the Tropic of Capricorn, where the heat can be quite excessive (especially during the summer months), extra precautions needed to be taken into consideration as to how to go about the alteration and addition onto the house during those hot periods. 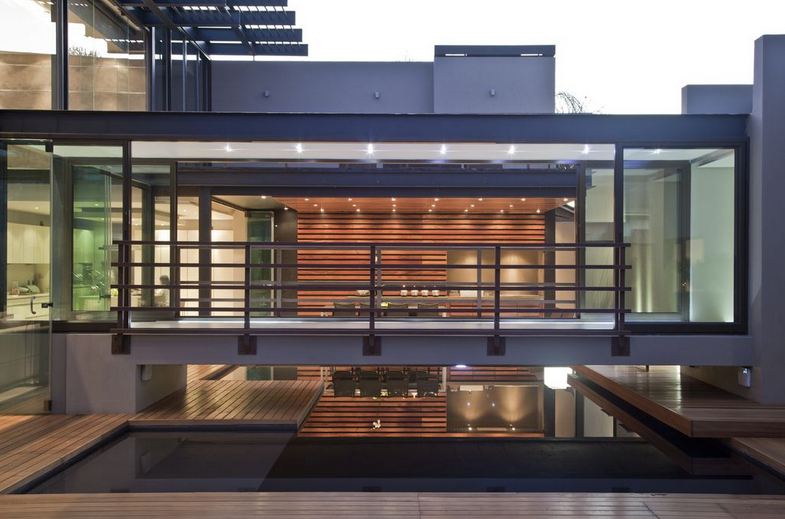 With Werner van der Meulen being appointed to this project, his initial brief described the transformation of the look of the existing face brick house, which was visually unattractive, into something modern and appealing to the eye!

As the curb appeal needed to be more inviting, an impressive entrance with water feature was going to do the trick! 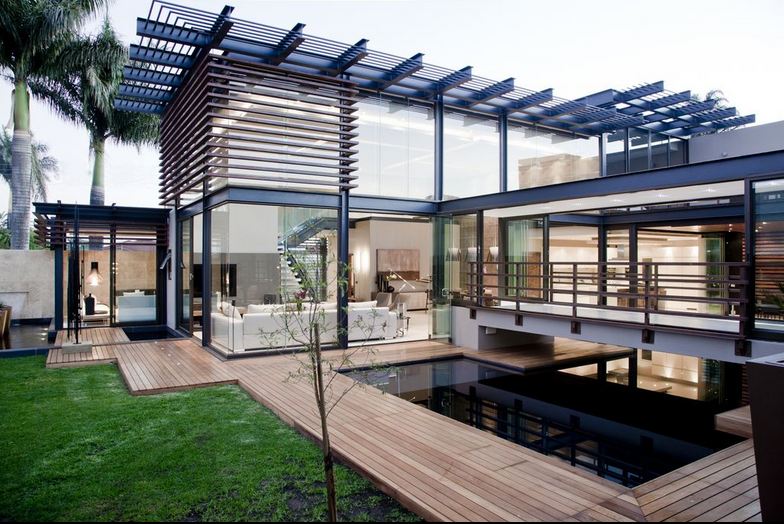 Due to the long, dark and outdated passage, the entire bedroom section was going to be redesigned, while an additional bedroom was requested on the 1st floor, which was going to open up to the living rooms. This rather unusual house, which was a mix of different design styles stretching over decades, was not only unattractive to look at, it made it quite uncomfortably hot to live in as well.

The extensive use of steel in a variety of different forms, as well as large expanses of opening glass and double-volume areas, turned out to be very successful as it allowed ample of natural light in. A lightweight, well-insulated structure ensured that the sun was allowed to peak into the house during winter months, and rather limited such during summer time. This setup also allowed for quick cooling down in the evenings, which enhanced the sense of open space, while allowing natural cooling to happen through the use of water features and the pool.

As mentioned earlier, the existing living areas were turned into an ‘open plan’, while double-volume spaces were created and specialized designer lighting was added. Seen in the photo below, the very unusual and distinctive staircase turned out to be quite a central feature in the home now! 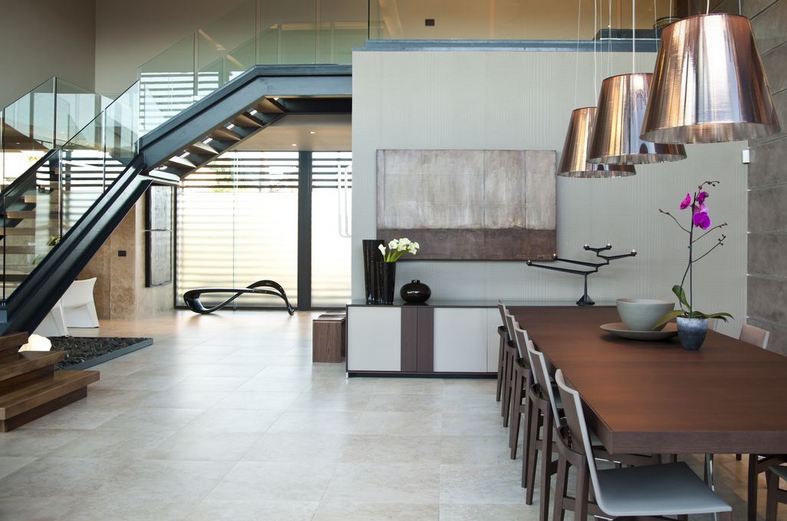 The awesome effect of this ‘floating staircase’ was achieved by burying a 6 cubic meter concrete block and anchoring the bottom of the staircase into it!

The fully-utilized indoor/outdoor lifestyle by opening up the rooms via the frameless folder doors, in addition to the water features and garden integration, was great in continuing the open plan feeling the owners were looking for. If need be, the actual house could turn into one large verandah! 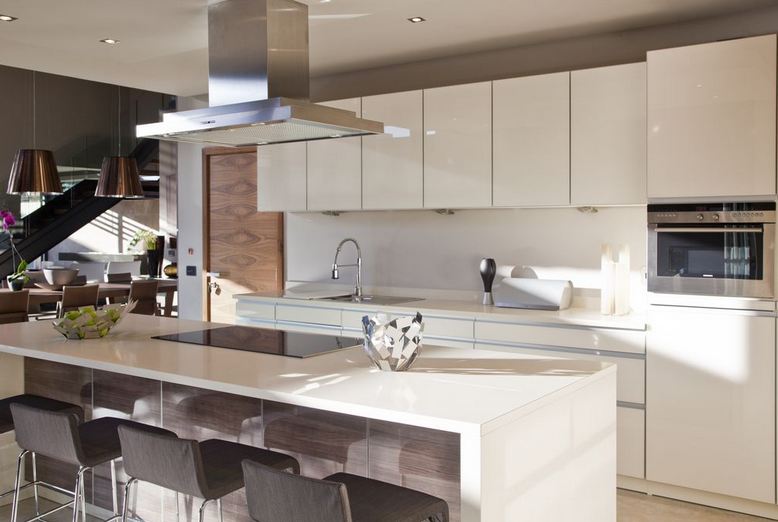 It’s interesting to point out that this entire building system turned out to be a challenge for the local builders, hence the architects were needed to coach them throughout the construction phase to make sure the desired outcome was achieved!

The bedroom wing of the house used large expanses of glass to open up, and was now accessible thanks to a bridge over the swimming pool. And yet another opportunity to have the glass sliding doors create a cross-draught ventilation! 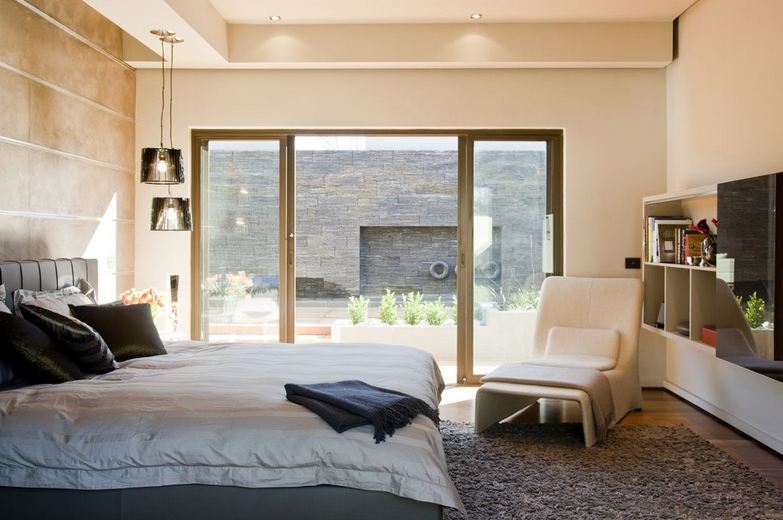 Even though the redesign was only meant to include the front portion of the house (including the entrance hall, living & entertainment rooms), the owners got excited about the prospects of revamping the entire house into a light and airy, modern, easy living home, whereby the living areas were all wrapped around the swimming pool! 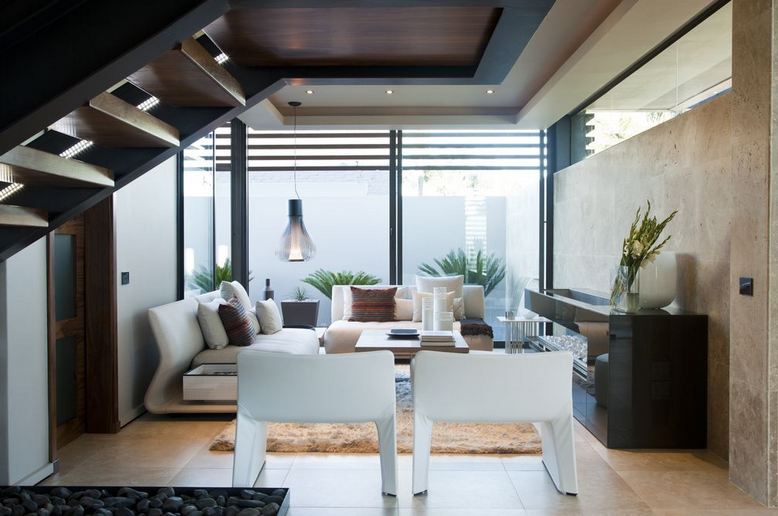 By using exterior louvres to influence the design of the horizontal groove lines applied on the double-volume plaster walls in the open plan dining room, it created a rather unusual character to perhaps what would have been a somewhat boring wall. Plus, the low horizontal ledges, aided by the built-in fireplace feature and selective works of art, further enhanced that feeling. 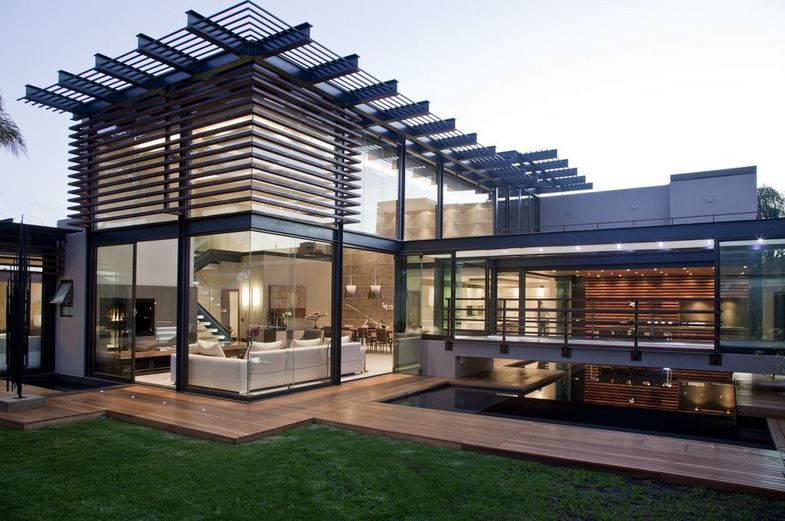 Notice how the swimming pool and patio area has been encapsulated by the horizontally-slatted timber wall, which stretches to the underside of the ceiling. This beautiful feature created reflections back into the black painted swimming pool with wraparound timber decking, hereby giving the impression that it encloses this entire area.

The Pride and Joy of Serengeti Lifestyle Estate