On a lighter note see the graph below.

Recent events have made it necessary that I dust off my tried and tested economic recession model and warn of rising recession risk as Saturday approaches. Unlike fellow economists whose models have explained 10 out of the last 2 recessions, mine has explained 3 out of the last 3.

It’s a simple one. It indicates that each time the Sharks have reached an important milestone in their rugby history, SA has suffered a recession. It first happened back in 1984, where a famous milestone was reached when former Bulls legend Wynand Claassen led the Sharks to the Currie Cup Final. They had made the final years before, but what was so unique about this one was that they did it from the Currie Cup B Section that time, upsetting the Cheetahs in the semi. 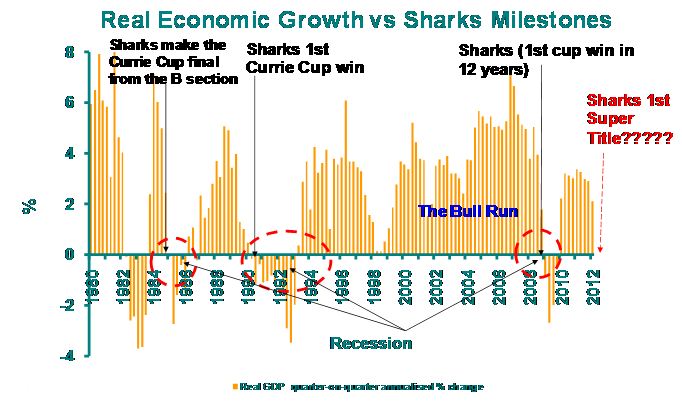 A few years later, on that infamous day on the hallowed turf of Loftus, the Sharks won their 1st Currie Cup, starting a “golden era” spanning up until 1996. Yes, you guessed it, the country had the mother of all recession spanning almost 3 years.

After their great run up until 1996, including 4 Currie Cups, a 12 year trophy drought set in lasting up until 2008 (dare I call much of that era the “Bull Run”???). Finally, the 3rd great Sharks Milestone was reached as the trophy drought was broken in October 2008 and, yes you guessed right, SA was plunged into a recession.

Now, almost 4 years on, we might be on the brink of the 4th famous Sharks Milestone, their 1st Super Rugby Title, and it will surely be the most famous of all of them should it materialize. And I think we’ll all be mighty impressed if they achieve this with their “Round the World in 3 weeks” travel schedule.

But ….??????? Batten down the hatches and don’t spend those bonuses yet. Want economic predictions? Don’t call me….watch Boots and All.

Interest rate – What a difference a point makes

Property bridging: what is it and is it the best solution for you?